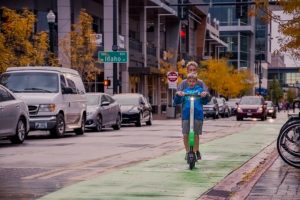 In Ireland, most teens included electric scooters in their Christmas wish list. Unfortunately for some, a lot of Irish parents decided not to make this particular wish come true. Definitely not because of the price commanded by electric scooters, as they are very affordable. The only issue keeping those parents from buying an e-scooter for their teen, is the vagueness of Irish laws implemented in its use in public roads.

The good news though, is that no less than Fine Gael TD Deputy Noel Rock of Dublin North West, took the initiative of publishing a bill that will clearly define the legality of electric scooters in main thoroughfares. The way things are, members of Garda Síochána, or the Irish police force, are actively enforcing road traffic laws on electric scooters traveling in public roads. The Gardai regard the 2-wheel motorized scooters as “mechanically propelled vehicles;” requiring licence, insurance coverage and tax payment.

Deputy Rock though is not challenging the Garda Síochána’s view regarding the matter, as his bill primarily seeks to institute e-scooter regulations in black and white. As it is, there are still grey areas to address in order to make clear, the legality electric scooters Ireland. Apparently the law that defines “mechanically propelled vehicles” and their requirements, is the The Road Traffic Act 1961 at Section 3(1) (a) and (b). According to Deputy Rock, his bill aims to exclude electric scooters in the definition of the antiquated Irish Law.

Why Electric Scooters are Popular in Ireland

Despite the legality issues, the demand for electric scooters in Ireland continues to grow. They are gaining popularity, especially among commuters. That is not only because e-scooters are light and portable, they can also shorten travel time. Instead of wasting precious minutes and hours in traffic-congested areas, commuting passengers can simply bring out their e-scooters to reach their destination in less time.

Using this alternative mode of transportation is similar to, or even better than riding bicycles to and from school or work. Electric scooters in Ireland run at a speed ranging from 20 kms/per hour up to 30 kms-/ph. They are easy to carry along, as they weigh only about 10 kilograms; while some, come in foldable models.

It is fuel-efficient as well, since users can simply charge-up batteries using standard electric sockets. One feature that makes electric scooters unique, is that users do not need keys to power them up. A smartapp is all it takes to activate a unit, which at the same time, gives a scooter rider, road navigation guides.