Eating disorders are very common among adolescents. Many adolescent health is at risk with these eating disorders. They are far too complex to venture into. A person just doesn’t wake up in the middle of the night and realize that she’s developed an eating disorder. Anorexia develops and they begin to starve themselves. Bulimia is also common wherein the person goes through some tough times to come up with her or his ingenious rites so the person can stuff her mouth with goodies and still maintain her weight via laxatives and by vomiting the food out. 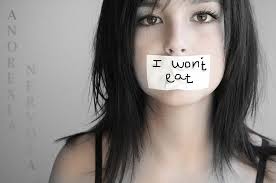 Many people especially young adolescent being plagued by eating disorders behavioral pattern. Many people wonder how these patterns are reinforced when most adolescents suffering from these eating disorders come from good families, normal background and healthy environments. That is why there is a thin line between everyone who is at risk and those who are faced with the same pressures and yet don’t develop the problems.
Adolescents usually want to look good, lose weight and love themselves. Many think that they are too fat but they aren’t. What rings in the adolescent’s ear are screams in a vacuum. Most of them believe in this like some people believing in their Zodiac signs.

Media, diet and fitness industries are taking full advantage of this market. Some do exploit people, but some really care.  The media also plays a huge role in these eating disorders. With those skinny models advertising false comfort by saying that the road to happiness is thinness and that they have the serum to becoming thin. This has clearly contributed to the growth of the eating disordered world. Whether they mean to do this or not, it is powerful pull and people allow themselves to be tugged along. There is an existing psychological theory that people become anorexic or bulimic. Most of these people need attention and a sense of control over their lives, coupled with intense fears of responsibility and going out on their own. Physical ailments because of starvation will require attention from family and loved ones and most especially a health expert.

Eating disorders predominantly develop among adolescent women in the higher socio economic status. But remember that these disorders spare no one. Anybody can develop an eating disorder, just as anyone can become an alcoholic or a drug addict.